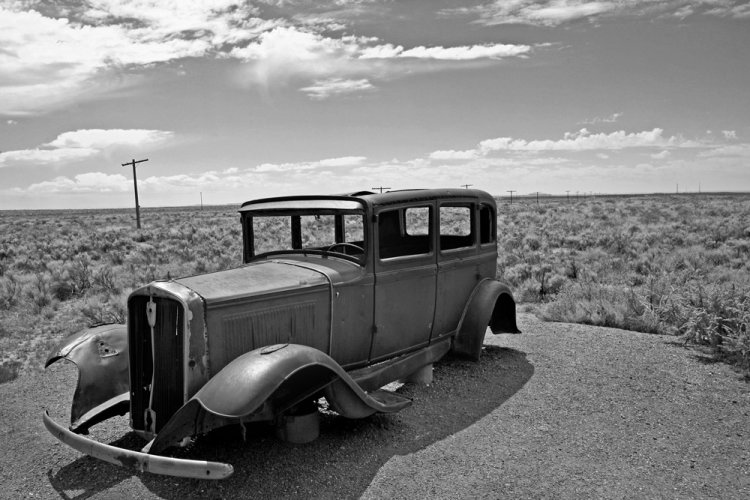 A rusted car wreck from the 1930ies, standing in the middle of the Painted Desert in Arizona. In the background a row of old, stripped and wary cable poles stretching out to the horizon, indicating the past course of Route 66 ......

Since the 1970ies most of the 2448 original miles of Route 66 from Chicago to Santa Monica, CA have either been overgrown by prairie crops or bypassed by modern highways. Only small stretches of this famous road remain intact these days, cut-off from modern traffic and business.
Today, and for millions of tourists cruising along the remaining 150 miles of the Historic Route 66 in Arizona, the “66” is a dream road. Flocks of these tourists stop by the few remaining old villages, settlements and gas stations, making snapshots, taking a short coffee break or a Hamburger and after 20-30 minutes they hurry on to the next touristic destination, ticking the box on their list of attractions.

But as soon as you slow down yourself, spending a whole day at one of the places on Route 66 and letting the noisy groups of tourists passing by, you get a very different experience of this historic road. A first car pulls over to the old gas station, other cars behind follow their example (“they are stopping, there must be something interesting to see”) and within 5 minutes this place turns into a noisy and hectic tourist attraction. But soon after, 20-30 minutes later and one by one, the herd of sightseers goes on and leaves quietness.
Now you have such a place for yourself, surrounded by silence, the great desert landscape and numerous remains of American history of the 1930ies to the 1950ies and 60ies.
You stand in front of a nearly ninety year old car wreck and out of the desert silence you hear yourself start asking questions: “were did this car come from, why did it end up here, what happened to the people driving this car, why did they leave their place, did they break down also, did they reach their destination, did they find what they were going for?”

In the 1930ies hundred thousands of farmers from the Midwestern dust bowl had lost their existence due to year-long draught and they were driven away from their land by scrupulous bankers and landlords, fleeing poverty and hunger, dreaming of a new life, paid jobs and a decent future for their families in California. They followed their dreams going westward and Route 66 became the stage of these hundred thousands of dreams.
But as described by John Steinbeck in his great and bitter novel “The grapes of wrath” and documented in the socially engaged photographs of Dorothea Lange, most of those dreams shattered – already along Route 66. Be it because their old and worn out cars and trucks broke down or because they were ripped off their money from business men along Route 66 taking advantage of their desperate situation, or because they ended up in California as slave-like harvest workers on the Californian farms, just to realize that poverty still had its grip on them.

In the 1950ies and 60ies Route 66 again was staging an American dream. After the horrors of World War II, the American people had stepped out of political and cultural isolation. A rapidly growing economy and (at that time) nearly un-imaginable technological progress enabled and encouraged them to leave the physical and intellectual narrowness of their home places and to explore their own continent-like home country America. And again Route 66 was leading the dreams towards the West.
But in contrast to the 1930ies were Route 66 was just the road leading to a destination, in the 1950ies the “66” became the destination, with its places, its local people with their relaxed and still very much pioneer-like attitudes and the breathtaking landscapes of the American Southwest providing the experience of a fantastic world to be explored and enjoyed.

The late 1960ies came with a different atmosphere reflecting a major change in American history and culture. Travelling Route 66 became more and more a political and intellectual statement. A rapidly growing citizen rights movement started to question and to challenge the morality of American society with its racial discrimination, the ongoing bloodshed in Vietnam and the suppression of fundamental American values by the political and religious class. Rebellion was on the American agenda.
The Rolling Stones (“Get your kicks on Route 66”) and the bitter-sweet movie “Easy Rider” were shouting out that rebellion against the establishment – and leaving the establishment behind by travelling west along Route 66 became an act of individual rebellion. Through Mick Jagger, Peter Fonda, Jack Nicholson and Dennis Hopper a myth was born: Route 66 as the road to freedom and into a better world.

The 1970ies started to bring a slow but brutal end to Route 66. Not only did the economic crisis, startled by the oil crisis in the early 70ies, damp down the dreams of the American people; requirements of cold economy initiated a slow death process for the famous route. The narrow and winding road was not sufficient any more for the big trucks and the exploding number of private cars. They required straight and multiple-lane highways to travel fast.
Mile by mile Route 66 was bypassed or simply overgrown by modern highways with sterile infrastructure provided by multinational corporations. Local “Joe & Mary´s Hamburger” became replaced by the McDonalds, Wendy ´s and Burger Kings.
October 13, 1984 brought the end. Williams, Arizona became the last town bypassed by Highway I-40, with its people cut-off from life and business the same day, as cars, trucks and people were now just passing by a couple of miles away in their rush towards their destination. The remains of Route 66 in Arizona became a deserted 150 mile road forming a northern loop from I-40 towards Grand Canyon and back to I-40.

The folks in the small towns and settlements of Hackberry, Seligman, Truxton and Williams had to make up their mind. Should they just give up and leave, like all the others having lived and done business along the vanished Route 66?
A small bunch of people damned the torpedoes. They stuck to their ground, took action and achieved governmental decisions to declare the remaining stretches of Route 66 as “Historic Route 66”. Clever marketing and relentless private efforts to preserve the historical artifacts of the 1930ies and 1950-60ies have created a touristic attraction luring in millions of tourists every year from all around the world.

Today, travelling Historic Route 66 is no longer an act of rebellion, but it´s fun, a lot of fun - and there is nothing wrong with that. Modern city slickers can travel this route for a couple of hours on a rented Harley Davidson, guided and pampered by travel agencies and getting a smell of the mythic rebellion this road once provided.
But if you take time and listen, every single old car wreck, gasoline pump and wood shack along Historic Route 66 tells a story about the American people, their dreams and their thrive for freedom. Any old car wreck along Route 66 tells you more about this than an abstract National Monument like the Statue of Liberty in New York City.

Route 66. Dreams are broken but the myth lives on.