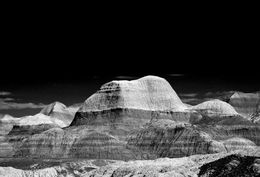 The landscapes of the American Southwest are dominated by numerous canyons and mountain ranges, shaped by million of years of erosion of the rock layers of the Colorado Plateau.
Most of these rock layers are formed by more than 200 million year old red-coloured sandstones which have been sedimented during geological periods where vast areas of the American continent have been covered by deserts and dunes.

Tectonic uplifts of these rock layers during the past million years, combined with erosion by rain, rivers, wind and frost, have created bizarre and beautiful canyons and rock formations. Nowhere on Planet Earth can such a large number of phantastic geologic formations be visited within a relatively short distance.
Since more than 100 years the US government has been very active to protect these natural treasures by assigning them to National Parks and National Monuments.

Since the the 19th century, the Canyonlands of the Southwest have been visited by photgraphers to capture the astonishing geological formations on film materials and to share it with a rapidly growing number of people interested in nature and environment.
The earliest photographers covering the Canyonlands between the end of the 19th century and the first half of the 20th century had to work with analoguous black & white film material. After the initial documentary photographic work done by Timothy O´Sullivan in the 1870ies it was Ansel Adams who brought the beauty of the Canyonlands to public awareness by a large series of artistic black & white landscape photographies done in the 1930s to the 1950s.

After Ansel Adams marvellous photographic work colour photos took over.
When you see the canyons of the Southwest for the first time, you are purely and massively overwhelmed by the enormous range of red colours, changing tones every few minutes and turning into flaming tones of red around sunrise and sunset. Combined with a dark blue sky these intense colours are dominating the overall visual perceiption.
That is why colour photos of these canyons and rock formations are so much liked, both by todays photographers and by people looking at such photos. This "Whow!" effect created by the intense colours makes it very easy to produce photos people like.

But at the same time, these intense colours are so "noisy and yelling" that the other optical information like textures, structures and tonation are pushed aside.
It is only through the use of black & white photography that the "hidden" beauty of these landscapes can be unveiled.

Making black & white photographies of these canyons and rock formations requires very precise exposure to capture the full range of tonation, lights and shades displayed by the rocks, independant whether you use analoguous film material or digital sensors. And the subsequent process of print production requires again very precise fine tuning of gradations, lights and shadows to achieve a technically perfect fine art print at the end of the whole photographic process.

Renouncing the "easy win" through colour photos with their smashing reds & blues, making good black & white photographies of the landscapes of the Southwest ist most challenging, not only from a technical perspective but also with regard to composition and expression.
An Ansel Adams spent decades to work out phantastic black & white photographies of these landscapes.

I just got started a few years ago.